We’ve already established I wasn’t wild about my first outing with Gabriel Allon.  However, given the reviews for The Heist (another novel in the same series by author Daniel Silva), and writing a manuscript where an art heist is the central activity, I thought, “Okay, why not?”

Unfortunately, this ‘adventure’ with everyone’s favorite Israeli/painter/spy/assassin/man who knows everyone everywhere, while the first 15% of the novel does actually have to do with a stolen Caravaggio, the book then veers sharply into politics.  The book wasn’t a page turner, in fact, I tried valiantly on three separate occasions to finish the book.  In the end, I skipped SWATHES of novel after Gabriel goes back to Israel (for reasons I don’t remember and really don’t care about).  Although part of a series, which I realize that fans of said series would have some investment in Gabriel, his wife (who is STILL nothing but meaningless arm candy/mother to be/vessel for carrying twins), and Gabriel’s career path, however, as a casual reader, the only thing I cared about was the plot, which was convoluted and certainly not the heist or recovery I expected it to be.

Reading the reviews on Goodreads, it appears I am not alone, and is perhaps my thoughts are best summed up by this account: “And before I knew it, my fun art heist caper was gone, and had been replaced by a dreary political thriller.”

For $9.99, I wildly overpaid for this novel, and it will be my last purchase supporting this author.  Perhaps if I had access to a library, I could check out books and skim through them, however, I’m not about to pay for another.

Did I pick up a few things for my novel?  Yes.  Could I have found these details elsewhere? Also, yes.

I’m also befuddled how this book has a 4.1 on Goodreads and a 4.5 on Amazon.  Perhaps Mr. Silva has his audience and people are willing to show up for the previous 13 BOOKS in this series.  No, thank you. 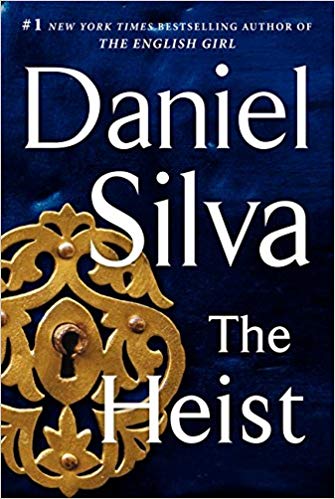 2 thoughts on “Book review: The Heist.”