As an author, I may not have sold the most books, but I have received some truly incredible reviews.  Over the years, two stick out to me:

I’ve got a few for you to choose from, dear reader.  And although it’s warming up here in Dubai, I wouldn’t call it ‘summer’ just yet…

I thought I would share a chapter focused on the Oscars from Room 702 (this is the second half of the evening).

Having seen her mother safely to her room next door, and, given how many hours she had been in heels, Kat isn’t surprised to feel extreme relief after removing her shoes and sinking into the luxurious mattress. Since leaving the Winchester so many hours ago, this is the first chance she’s had to be alone … with him.

The statuette is heavier than she had thought it would be. Of course, that’s what everyone says.

Kat flips on the television, finding the E! Network and leaves the channel on, hoping they will replay her speech. The newly minted Oscar award winner is doubtful; after all, there were some highly memorable events throughout the broadcast, and hers was not among the highlights.

Other than the fact she now has an Oscar, the whole evening feels like a dream. Somewhere within her champagne-soaked brain, she recognizes this is reality. The statuette is hers, forever, a permanent memento of all her hard work and dedication—of sixty-hour weeks, of getting through the glass ceiling.

The statue sits in the middle of the pristine white comforter.

She realizes this would be the point when anyone in her position might question, wow, has everything I’ve given up over the years been worth it?

For her, the answer is an instant and unequivocal yes. Standing on the stage in front of her peers and being recognized in the best way possible is worth not having a “normal life.”

With her emotions spent and the remaining alcohol waning from her system, Kat slips off her dress, splashes some water on her face and crawls into bed with the small metallic man, more content than if any flesh-and-blood person was next to her. 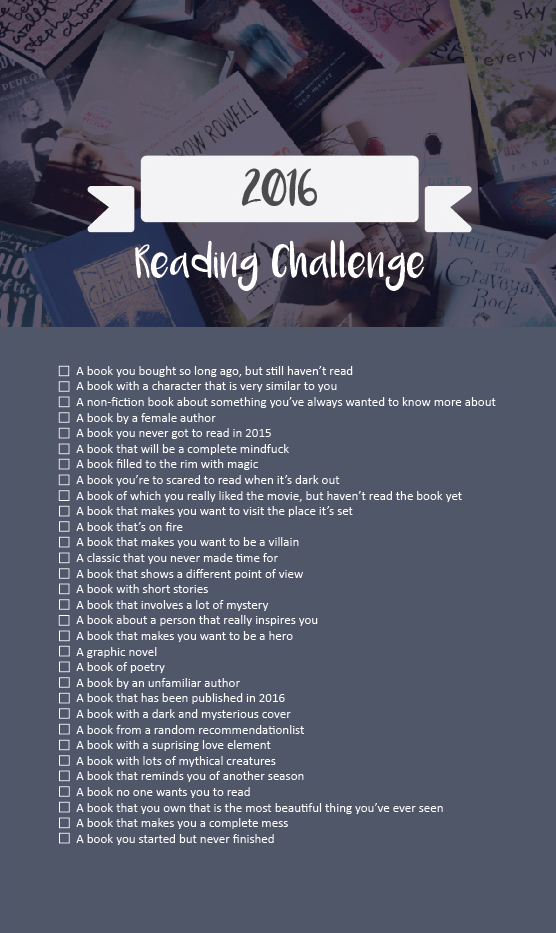 Looking at the list above, I can see my books easily tick the ‘a book by a female author’ or ‘a book by an unfamiliar author’ categories.  At some point this year, I will have an additional book(s) (insha’llah) to qualify as ‘a book that has been published in 2016.’

For the record, I would love a recommendation that ticks the ‘a book that will be a complete mindfuck.’

In 2014, when I first approached the Room 702 free KDP run, I had no concept of what numbers I would accomplish.  I think in the back of my mind, my hope was to make it up to the Top 100 on Amazon.  When I peaked at #22 for all Amazon free books, it was a great feeling.  At that time, other than paying for some of the promotional websites to help market my book on my behalf, I did not: have access to BookBub (but damn if I’m not going to keep trying) or officially advertise on Twitter or Facebook (I did do posts, but did not pay for anything specific).

When I set out recently with Life After Joe, I knew I would be up against a challenge.  Although my thought process went something like this: “There will be a ton of people online for Cyber Monday, so why not offer them something for free?  Who doesn’t like free stuff?” I had two relatively large details to overcome:

However, even with the above, I peaked at #44 and remained in the Top 100 for at least 72 hours.  I was in the Top 1 (or 3) in categories that really mattered to me (Women’s Fiction and Contemporary Fiction).  In this, I feel there is some element of understanding how the system works and proud of my little self published attempts.

So, here is my (unsolicited) advice for the ‘process’ (if you can call it that).  Hitting the Top 50 both times is not something everyone can claim, so hopefully some of this information will be helpful to you.

And what do you have to add?  Any other techniques, platforms, or tricks to try?  I’ll have another book out next year and would love to improve upon my numbers again.

“We place our fingers on the device and concentrate on a question or person. We ask the spirit to answer questions for us.”

“I do! I promise! So what should we ask first?”

“We need to know if Brendan is still in this room.” Closing her eyes and lowering her voice, Maureen says aloud, “Is Brendan Sullivan with us tonight?”

Ever-so-slightly the Ouija device swings toward the No response of the board. Both women take their hands off the board and look at each other. Thalia asks, “Does that mean someone else is here?”

Maureen chews on her thumbnail and responds, “Maybe we should ask if we can speak to Brendan? He could be busy in the afterlife.”

The women take a long moment to look at each other, and Thalia says, “You’re right. We didn’t come all this way not to find him. Plus your fans will want to know we tried everything.”

They place their hands back on the piece of plastic, and Maureen asks clearly, “May we please speak with Brendan Sullivan?”

Once again the planchette moves slowly but surely in the direction of No.

The ladies remove their hands, stumped by a piece of cardboard. Maureen comments glumly, “I guess we never thought he wouldn’t want to talk to us.”

Thalia snaps her fingers and says, “What if we ask who we can talk to?”

“Or maybe we should ask how he died?”

“You think that an inanimate object can tell us what the coroner couldn’t fully determine?”

“Maybe we can figure out if what he did was intentional or not.”

They reposition their hands, and Maureen asks, “Did Brendan Sullivan commit suicide in this room?”

The device swings over to No more quickly than with the previous two questions. Thalia, in frustration, removes her hands and says, “Maybe we got a defective Ouija board. This one seems to be pessimistic.”

“All right, let’s give it one last try. Maybe we can get it to spell something for us.” Once again their fingers come to rest lightly on the plastic, and Maureen pitches her voice low. “Great spirits of the beyond, we seek a great favor from your wisdom. Although he cannot be reached on the other side, we seek to find out how Brendan Sullivan met his ultimate demise.”

“Laying it on a bit thick, don’t you think?” Thalia murmurs in a low tone.

Maureen whispers back, “Shh!” then continues, “If you would be so kind to tell us, we feel his spirit can come to rest and would be very grateful for your guidance.”

They wait in silence, on edge to see if something happens, and Maureen concludes, “How did Brendan die?”

Same test again, this time with the first page of Room 702.

You are heartfelt, rational and strict.

You are imaginative: you have a wild imagination. You are philosophical: you are open to and intrigued by new ideas and love to explore them. And you are calm under pressure: you handle unexpected events calmly and effectively.

Experiences that make you feel high efficiency are generally unappealing to you.

You are relatively unconcerned with tradition: you care more about making your own path than following what others have done. You consider taking pleasure in life to guide a large part of what you do: you are highly motivated to enjoy life to its fullest.

Very different results!  I guess the personalities of Room 702 (yes, a character) and Liz McNeil are quite varied.  I wonder what both mean about me…

The Queen of England: Coronation, available on Amazon